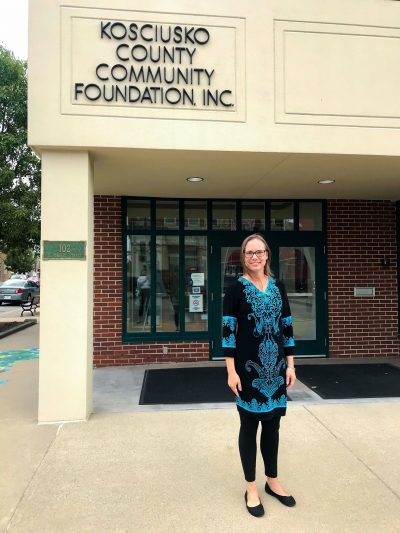 Meet Stephanie Overbey! She is the CEO of the Kosciusko County Community Foundation. Stephanie loves to read and travel. She has traveled to around half of the United States and has even spent a semester studying abroad in Europe while in college. She and her husband, Jamie, have a set of triplets who are twelve years old, and a family dog. She always says that her greatest adventure has been raising her children with her amazing and supportive husband. Stephanie was born in Syracuse, New York, but spent most of her childhood in Anderson and Indianapolis Indiana. She actually moved a grand total of seven times from birth to the age of eighteen! Although moving can be tough, she definitely learned how to adapt and make friends wherever she went. Even though she didn’t have as many worldly things to get joy from, she always had what matters, like a supportive family to lean on.

Stephanie started working at the Kosciusko County Community Foundation in 2000 as a program officer. In early March, she became the CEO of the organization, just two weeks before the Stay-at-Home Order was announced. If there is anything she’s learned from that, it’s that sometimes really good things and bad things can happen at the same time, but we learn to persevere and grow from them. Her biggest struggle has really been a blessing in disguise, which is balancing both work and family. Through that struggle she is reminded of what’s important in life and how to stay focused on what really matters. Suzie Light, the former CEO of the Kosciusko County Community Foundation, has really been a great mentor to her when it comes to balance and always working to be the best version of yourself for your family and community.

Her and her team’s goals every day are to help grow the foundation by serving more donors & nonprofits, so then they can make a bigger impact on the community. A verse that Stephanie lives by comes from Luke 12:48 NIV, “Everyone to whom much was given, of him much will be required”. With the position she has earned, she is able to help others give back to those who work so hard to help the community.

If she could give anyone going into business advice, Stephanie would tell them to have a service attitude, work hard, surround yourself with people who know things that you don’t know, and listen to them.

Through her work at the Kosciusko County Community Foundation, Stephanie has learned that you don’t need to have a title to influence others and make a difference in people’s lives. She’s gained a lot of what that means from her mom, who was both a hairdresser and stay-at-home mom. Stephanie remembers her mom is always the one to bring someone a meal when they’re sick, and always giving back at church. Even though her mom wasn’t in philanthropy, she inspired Stephanie to pursue a career in helping others. Stephanie is so extremely grateful to be in the position she is in, and really excited to work hard with her amazing team to help bring more good into the community. She has learned that, if you want to go fast, go alone, but if you want to go far, go with others. Knowing this, Stephanie and her team at the Kosciusko County Community Foundation strive to make our community and those in it the best they can be!

Lauren Klusman is responsible for creating, implementing, and measuring the success of marketing, communications, and public relations programs that will enhance the organization's vision. In addition, she does photo and video work in order to increase visibility of Chamber members.